Coming from a household that seemingly revolved around music, I’ve had my fair share of heavy music related experiences. Little did I know, it would be a study abroad trip to Cuba where Id truly see just how universal and influential music is.

Having barely passed Spanish 1 in high school with a C, I was mentally preparing to be frustrated by my inability to translate and understand, not just people, but music. Come to find out, I wouldn’t need those presaved Spotify playlists as much as I thought I would.

Though the Cuban government has, and still tries to retain a certain amount of filtering of what comes in from the United States, in both the sense of the trade embargo we placed on their country, and our culture in response to the embargo, music has managed to easily slip through the cracks, and the Cuban people love it just as much as you’d imagine us homesick college students did.

The non stop cultural fusion through music that occurs in Cuba really shines through in what we already consider to be one of the greastest classic rock songs of all time; Hotel California by The Eagles can be heard playing anywhere and everywhere just as it can here in the states. Little did I know the happiness I felt when I heard a friend of our professor strum those first few chords on the porch of our rental home in Tarara ,it would not be my last encounter with the song. 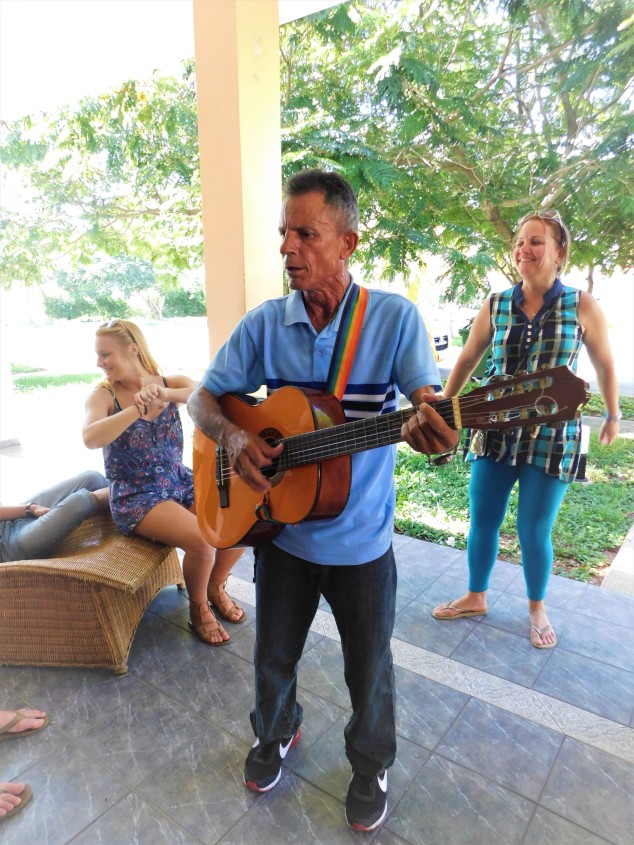 I would find it again while hiking to our first water fall in the country side, being sang in Spanish by an elderly man sitting on a rock with his guitar over looking this scene.

And again in an, odd but awe inspiring, trip to the “prehistoric wall” painting in Vinales, being played by two Europeans off their phone who had also climbed the rocks as a few of us on the trip also did, to just below where the mural start, in an attempt to get a good view of the mountains adjacent.

And many more times throughout the two weeks abroad

Just as with any lively town, its not uncommon to turn a street corner in Havana and find a band serenading the streets in both Spanish and English, or be invited to dance in a bar

(Katherine Hamilton, a Flagler college journalism major part of the Study abroad trip being taught how to salsa by a local in a roof top bar overlooking the Malecon) 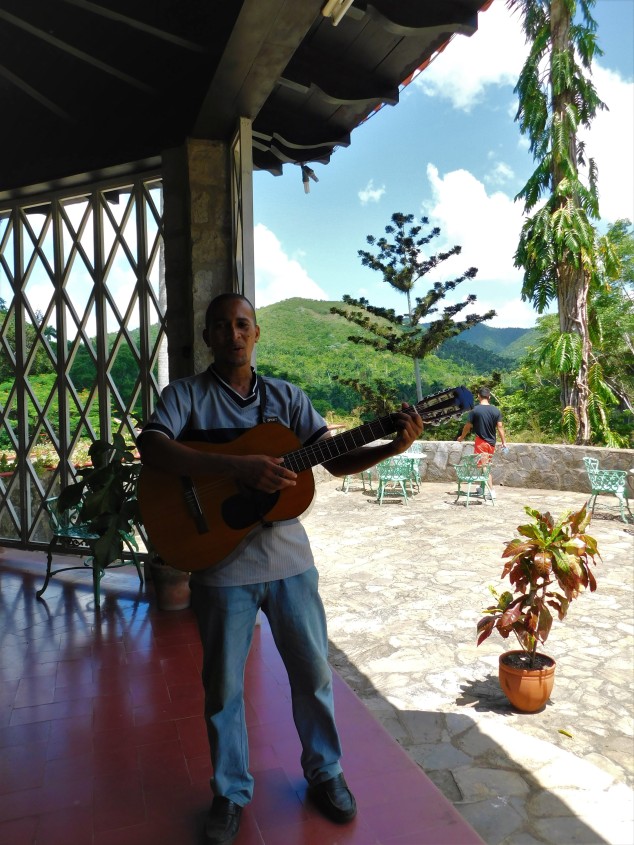 (Musician at restaurant atop Soroa park and orchid gardens)

For the duration of the trip we had the same three taxi drivers take us from location to location. We eventually learned to find the drivers all Spanish selections on the radio soothing, and eventually familiar, mumbling along to some songs as the trip went on and we heard them more, serving as background for post hike van naps. However, we were ecstatic when he started playing hits like, Total Eclipse of the Hear, and Stevie Wonders, I Just Called To Say I Love You, when we first entered the van on the Fourth of July, the driver swaying back and forth with us as we sang in the back seats.

(Carlos, one of our taxi drivers, who greeted us with Total Eclipse of the Heart on the fourth of July-photo courtesy Tracey Eaton )

Art and various other odes to musicians and band can also be found throughout Cuba, particularly John Lennon of the Beatles. In John Lennon park in Havana Cuba, a Statue of Lennon seated on a bench permanently resides in the park for photos, and just across the street a bar named, The Yellow Submarine, plays nothing but classic rock hits all day and night. Even the team of On Cuba, an independent media outlet in Havana, decorated their office with a quote from, Imagine, by John Lennon. 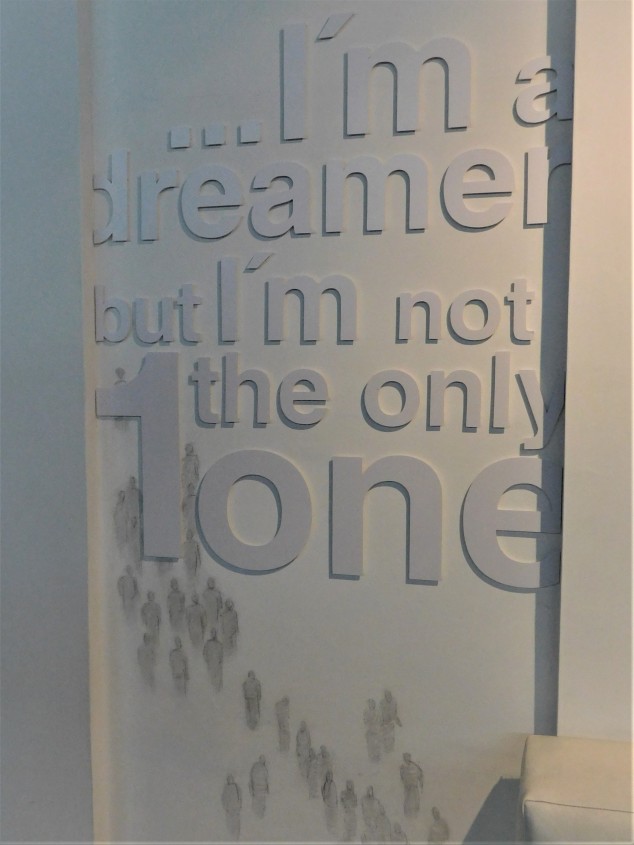 And of course, there were the night clubs. One of the most noteworthy of all, and such a crowd pleaser we had to make a second trip back the night before we flew home, was Fabrica de Arte in Havana. Factory turned nightclub and art gallery, is well worth the line that sometimes stretches around the side of the building, lucky for us, a family friend of our professor works as a security guard in Cuba and was able to talk the bouncers into sliding us ahead in line. First walking in your blinded by bright white walls, and have trouble paying attention as your explained how you drink card works because your eyes are catching glimpses of beautiful artwork peaking out from behind anyone from Cuba’s best dressed to fresh off a day of backpacking Europeans. Finally emerging from the initial crowd at the door, you find yourself in, literally, an art gallery. White from floor to ceiling with people quietly shuffling past pieces and sipping drinks. After so many rooms of back to back art, you find a hallway with people pouring out of it and can hear the thumping from speakers. Once you finally break through the doorway, you’re confused to find a huge nightclub and bar. This continues throughout the building for about three stories, with only one exit to try and find your way back down to. Some rooms are stages with live bands, some are DJs, but both English hits like Bruno Mar’s, That’s What I Like, to Spanish favorites like Despacito and Bailando served as the soundtrack to two amazing nights.

One of my personal favorites had to be Casa de la Musica in Trinidad. After a decent trek up a notably steep hill on cobblestone streets, we arrive at the bottom of Casa de la Musica. Practically throwing my 1 or 2 CUC (Cuban convertible peso) cover charge at the bouncers, I was awe struck to be looking up at an outdoor, amphitheater style, stage surrounded by long benches carved into the limestone, packed full circle with people and waiters buzzing back and forth with trays full of drinks. After just a couple of minutes of finding our seats only 3 rows up from the stage left, the girls of the group were rushed down, not only to dance in the area in front of, but on stage too. 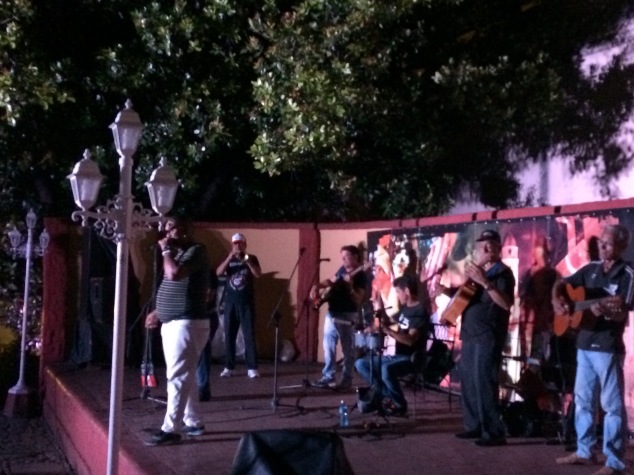 Though Casa de la Musica featured exclusively spanish hits, at least on the night we were there, just another trek up a hill to the right of Musica, you could find a line curving out of a cave on another hilltop overlooking more of Trinidad. A change up between english and spanish music by a DJ made the Cave the perfect spot to end the night..until you realize you have to hike back up out of the Cave after hours of dancing.

One of the more heart warming experiences by far, though, had to be getting news that we were invited to see a pin pal of one of the students of the study abroad group perform at a music venue in Havana. Flagler’s Hannah Pierce got into contact with Cuban singer and musician, Aurorita Feliu, and upon going to see her perform you could tell the rest of us were beyond thrilled she did. Not only did she have a one of a kind voice, she was pure talent on guitar, and had an equally as amazing band backing her. Though she had us fully mesmerized and swaying with the Spanish pieces she performed, she paused to introduce her “American friends”,the study abroad group, to the rest of the crowd, and begin singing Janis Joplin’s Mercedes Benz with just us snapping our fingers to accompany her. With other locals, and even some family and friends of our professor who were aiding us during the trip, joined in on the song, it was quite the emotional and culturally connecting experience for us all.